Excuse the language, but it's a lamentation I've uttered many times while navigating to whatismyip.com and being bombarded with ads and superfluous text when all I want is at most 15 characters. It's also in reference to sites like the fucking weather and what the fuck should I make for dinner which are hilarious in their vulgarity. Unfortunately, whatismyfuckingipaddress.com was already taken.

I decided I was going to create a "competitor" to whatismyip.com because that site sucks. But mostly because it's something so simple that it shouldn't require navigating a bunch of text and ads. Of course, as it turns out, numerous sites already do that (like http://icanhazip.com/), and whatismyip.com offers a similar service here.

But just because someone else has already done something many times doesn't mean you shouldn't do it, too. Right?

But I didn’t want to bootstrap some server-side language runtime for something as simple as displaying an IP address. Surely that could be done directly from the server. And it can. 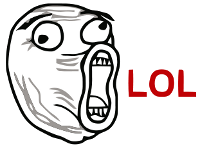